Minke whales: The smallest one

The minke whale is the smallest member of the rorquals and the second smallest species of baleen whale.

For a long time, the minke whales, that can reach up to 8,5m (28ft) weigh up to 7 tons and live up to 50 years, wasn’t considered as its own specie but as a small blue whale or a baby fin whale. Similar in appearances, both rorquals and baleen whales, it wasn’t until later, whalers realized that it was indeed a separate specie. What distinguishes the species the most, apart from the enormous size difference, is a white streak on the minke's left fin. 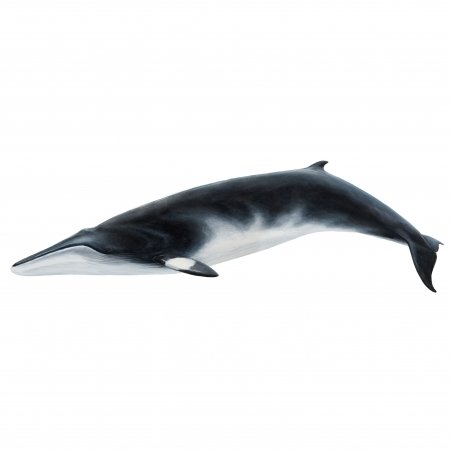 Minke whales can travel great distances. A minke whale that was tagged in Faxaflói Bay, around Reykjavík city, on 27 August 2004 gave its first signal on 17th of November, already travelled all the way over the Mid-Atlantic Ridge, 900 km (560 mi) west of northern Spain. Its next position was transmitted six days later, some 700 km (430 mi) around the Azores, and its last signal was received on 5th of December along the Canary Current, 1,000 km (620 mi) In all, it travelled 3,700 km (2,300 mi) from its tagging location in a little over 100 days.

Abundance: The minke whale was once the most abundant whale around Iceland, however populations have dropped in the last decade, believed to be due to climate change, causing movements of their favored diet to change but also thought to be because of an increasing numbers of humpback whales, a more dominant species pushing the minke whales to other feeding areas. Maybe both having an impact. Minkes are sometimes first spotted in early February  but observations usually increase after March with peak months between May and August and than decrease again after October.

Ecology and Behaviour: We mainly encounter solitary individuals traveling or feeding, however in the last couple of years we have been seeing increased observations of pairs. We often see aggregations around the same shoals of fish but disperse after feeding. You will never see a minke whale fluke-up but you may see the side of the fluke cutting the water’s surface as they generally turn their bodies when surface feeding. Occasionally seen breaching, most breaches have been observed in rough seas. Vessel interactions can occur but very rarely.  They are easy to ID as they tend to surface snout first and then the blow-holes and dorsal should be at the surface at the same time. If close enough you will of course see the white pectoral bands. The blow is usually invisible however, can become visible when sun is low and in rough seas. The blow has also a very distinctive smell after feeding (Stinky Minke).